Abbay Media’s goal is to be a trusted and reliable source information for the people of Ethiopia and the world at large. Abbay Media believes people deserve to know the truth and takes seriously the necessity of delivering accurate, unbiased, untainted and timely information.  Abbay Media is a forum for exchange of views and news among Ethiopians and friends of Ethiopia on matters of significant importance that could have high impact on the peace, integrity and sovereignty of Ethiopia and on the welfare of it’s people.

Abbay Media was established in September 2007 to provide accurate information about current Ethiopian affairs. Abbay Media gave platform to the many civic and political organizations, movements, activists, human rights defenders and individuals who were fighting for democratization of  Ethiopia.

After serving our community for 9 years in late 2016, following the start of free Live broadcast by major social media platform, Abbay Media took advantage of the new found opportunity and organized an international network of citizen reporting mechanism via Facebook live streaming. Abbay Media covered live Ethiopian events from more than 35 cities spread out in all 7 continents. Abbay Media’s live broadcast of events not only informed the scattered all over the world Ethiopian communities but also help them walk together in synchrony. Abbay Media’s live steaming significantly reduced the need for activists and their audiences to travel across towns, states and continents. Abbay Media delivered never before broadcasted social, Entertainment, Sports, Civic, Political, Religious and Community events straight to the living rooms of our people.

Abbay Media was blocked in Ethiopia for 11 years by the previous dictatorial regime that ruled Ethiopia for 27 years. The block was lifted in 2018 after Prime Minister Abiy Ahmed became the new head of state.

In 2019, Abbay Media upgraded to a medium sized studio in Meskel Flower sub city in Addis Abeba and started producing regular shows in preparation to start television broadcasting in 2020. 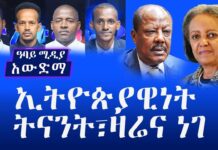