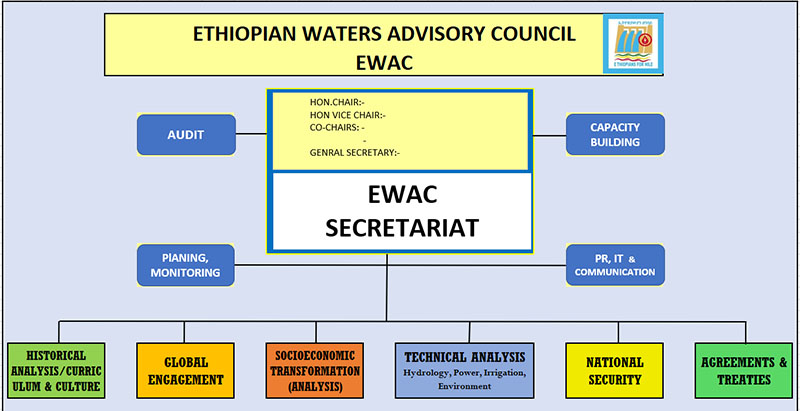 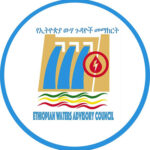 The concerned group of Ethiopian professionals and activists has made significant strides since its inception. It has empowered itself considerably after the announcement of the one-sided and pro-Egypt statement by the U.S Department of Treasury as well as the World Bank on the filling, monitoring, management and use of the Nile; and the implementation modalities of the GERD. The unprecedented statement of the Treasury Department and the acquiescence of the World Bank undermines Ethiopia’s sovereignty severely; and diminishes its capacity to modernize. This unacceptable condition enraged all Ethiopians and friends of Ethiopia; and emboldened them to act.

The unfair, unjust and lopsided position of the U.S. Treasury and the World Bank on the implementation and management of the Grand Ethiopian Renaissance Dam (GERD) has mobilized the Ethiopian public; and energized concerned Ethiopian professionals, activists and Ethiopia’s friends.

Ethiopians with diverse skills, professions and backgrounds are in the process of pulling their expertise together in defense and support of Ethiopia’s sovereign and legitimate rights to harness water resources within its own territories for the betterment of its growing population. Thousands of Ethiopians including members of Ethiopians for Abbay (the Nile) signed petitions with the sole intent of drawing the attention of the global community of the unfairness of the Agreement on the GERD that favors Egypt and puts undue pressure on Ethiopia.

A protest letter signed by 148 concerned Ethiopians was hand delivered to the President of the World Bank, Sub-Saharan Executive Directors of the Board, the U.S. Executive Director and through her office, the U.S. Secretary of the Treasury, World Bank Corporate Vice Presidents, the Chairperson of the World Bank Inspection Panel as well as Prime Minister Dr. Abiy Ahmed and Ethiopia’s Ambassador to the U.S., Dr. Fitsum Arega.

We are pleased to record that the Inspection Panel responded and met with us electronically. In this session attended by four members of the Panel on the Bank’s side; and Dr. Aklilu Habte, Dr. Semu Moges and Dr. Aklog Birara on our side, our team underscored the need for the World Bank to play a bridging rather than a political role. The team emphasized the reputational and moral risks the World Bank faces not only in Ethiopia but also throughout Black Africa. The team recognized the valuable contributions of the World Bank in its capacity sponsoring, financing and serving as a hub for the Nile Basin Initiative (NBI), an initiative that we believe should be resurrected and supported by the World Bank and U.N. specialized agencies.

Ethiopians for Abbay (the Nile) have played a constructive role in defending Ethiopia’s legitimate rights to complete the GERD on time; and, further, to utilize its water resources. In the light of this commitment, the group believes that our impact will be far greater if we focus on the larger and common goal of serving Ethiopia and its diverse population through a robust and collaborate approach rather than individually and in silos.

Egypt has succeeded in establishing its hegemony over the Nile, largely because it is able to dominate the narrative. From children in kindergarten to top Egyptian leaders, Egyptians speak with one voice. Regardless of the facts on the ground, their collective narrative is that Egypt is entitled to its colonial and exclusionary “natural and historical rights” over the Nile.

Accordingly, we feel that it is about time for Ethiopians and other Black Africans who share Nile waters to change this false and outdated narrative.

The Secretariat of Ethiopians for Abbay/the Nile plans to invite anyone and everyone to join this nonpartisan and apolitical community that is bound by a common national purpose; and contribute by joining self-governing and independent thematic work or task groups whose broad parameters will be discussed in greater detail below.

The purpose of the thematic groups is to use state of the art analytical tools and methodologies; and to produce evidence-based and historically irrefutable materials in order to raise systematic and sustained global awareness; to educate Ethiopian society, especially school children; to remind all Ethiopians and friends of Ethiopia concerning the Abbay River or the Blue Nile and other Ethiopian tributaries that feed Nile waters; and to offer high quality policy papers to Ethiopian learning institutions, the public and government officials.

Ethiopians for Abbay/the Nile plan to utilize evidence-based analytical reports and social media tools in promoting and defending Ethiopia’s sovereign rights over its water resources, including the GERD; and to debunk and or diffuse Egyptian propaganda, saber-rattling; and subversions.

Recent consultations between Ethiopia and riparian countries in Sub-Saharan Africa, most notably the Presidents of Kenya, Uganda and Rwanda offer a window of opportunity to Africanize the Nile. Ethiopians for Abbay/the Nile can and should reach out to other Black African academics, experts, activists, media and institutions of higher learning as part of their global engagement program.

Mutual learning, exchange of information, evidence and policy papers among Black Africans from riparian countries will yield enormous benefits for Ethiopia and other African nations.

The Secretariat of Ethiopians for Abbay/the Nile proposes that we restrict ourselves to a non-judgmental, non-partisan, non-ideological and non-political role advisory role. Our products and services will go a long way in raising global awareness among bilateral and multilateral agencies such as the United Nations system, the European Union, the African Union, foundations, academic and research institutions and civil society organizations across the globe.

Another dimension of our collective endeavor should highlight to Egyptian society and the Arab world that contrary to Egyptian ultranationalist propaganda, Ethiopia and Ethiopians have no intention to harm Egypt and its people. The way out is not war; but negotiation and consultation that serves all riparian nations.

In this regard, the Secretariat recognizes the urgency and gravity of the situation with regard to the current and stalled negotiations on the use of the Nile within Ethiopia’s boundaries; and on the pace of filing, monitoring and management of the GERD financed entirely by Ethiopians.

The Secretariat urges members and thematic groups to work collaboratively and tirelessly and debunk Egyptian claims over Nile waters in general; and in particular, dismiss the defunct ‘Wuchalle’ like treaty of the 21st century that is proposed and is being imposed on Ethiopia by the U.S Department of Treasury and the World Bank. Neither of these bodies has a legitimate role on the matter.

Beyond the completion of the GERD that Ethiopia plans to begin filling this coming winter season, the Secretariat believes that it is imperative for us to defend the sovereignty of Ethiopia over its territorial waters; and protect our country’s right not only to complete the GERD; but also to harness all of its waters for development irrespective of who governs Ethiopia.

This grand objective requires that all Ethiopians need to come together in unison in defense of their country and its rights to use its resources to alleviate poverty and improve the livelihoods of the population; to boost industrialization; and to generate employment.

Throughout their long and distinguished history, Ethiopians have sacrificed their lives, defended Ethiopia’s independence and preserved its territorial integrity so that succeeding generations would enjoy a better life. The construction and completion of the GERD is a major part of Ethiopia’s ambition to create a prosperous and modern society.

The Secretariat and its members recognize that Ethiopians are far behind in their response to the current crisis. However, they are highly motivated and stand together beyond ethnicity, religion, social status and political tendency.

The Secretariat recognizes that the challenges ahead are formidable. Among these challenges is the fact that successive Ethiopian governments had failed to place ample emphasis in educating generations of Ethiopians on the Abbay/the Blue Nile River; and in underpinning its huge potential for the development of the country as a whole. It is not enough to call Ethiopia a “water tower.” The concept must be translated into programs and projects that change lives on the ground.

There is a critical gap that the education and history thematic group would have to work diligently and methodically to fill. Among the products is a meaningful curriculum for all Ethiopians students from kindergarten to higher education and strengthen a common narrative.

We also need to focus on the education and awareness of the global community that is blinded and misguided by Egyptian diplomacy. In this regard, the global engagement thematic group is encouraged to initiate and launch a multiyear global engagement program using modern media tools, campaigns and learning materials emphasizing Ethiopia’s legitimate rights to use its water resources for the betterment of its 115 million citizens.

The Secretariat believes that in addition to the Africanization of the Nile River proposed above, it behooves us to discredit the venomous, fake and destructive misinformation campaign and propaganda by Egypt, the Arab League and by some well-financed non-governmental environmental groups, including International Rivers. It is time that the thematic group also explores an Ethiopian talent pool dedicated to lobbying efforts to counter Egypt’s systematic falsification program.

Egypt’s relentless global campaign against Ethiopia is a national security threat for Ethiopia. It must be repulsed systematically and wisely using fact-based analysis.  Egypt’s propaganda and subversive activities undermine peace, stability and democracy not only in the Horn of Africa; but in the entire Sub-Sharan Africa. Accordingly, the global engagement and sovereignty thematic groups are encouraged to work collaboratively and synergistically.

The Secretariat proposes that each of the thematic groups meet together with their team members; elect or choose their chairs; define their terms of reference; agree on a calendar; and produce their papers for dissemination and archiving by the Secretariat.

How we plan to execute our common agenda

Ethiopians for Abbay/the Nile plans to follow a simple, flexible and synergistic structure as shown in the attached organizational chart; and as discussed below:

II) Thematic Working Groups and Their Broad Roles are Proposed Below:

On the basis of EFA’s commitment and program of action, the activities and operations of the Secretariat and the thematic working groups refer exclusively to Abbay/ Blue Nile and other rivers within Ethiopia’s boundaries.

Finally, please note the attached matrix that shows the proposed organizational structure of EFA/the Nile and proposed membership for each Thematic Working Group. Consider this to be a living document that will be adjusted according to changing needs; and that will be populated with new members as they show personal and individual interest to serve the common cause of Ethiopia and the Ethiopian people. 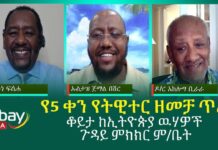 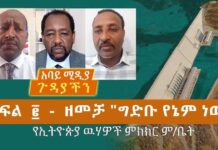 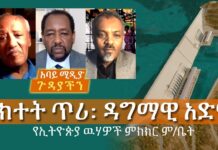 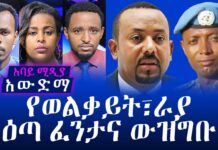 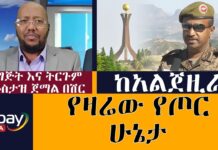 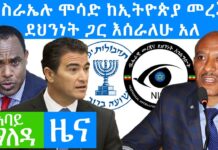 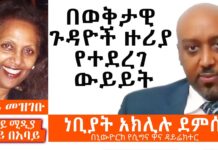 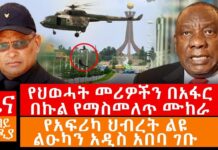 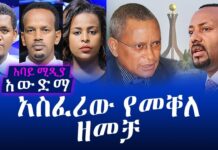